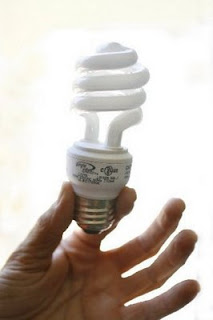 So we’ve all bought in on CFL’s (compact fluorescent lightbulbs), right? Maybe we’re like the Zuerchers in San Francisco (amazingly reported in the NY Times). See, they listened to Al Gore’s movie, bought into the Big Environment movement and replaced nearly every bulb in their house with CFLs. Sure it cost them a little more, but it’ll save them on their energy bills – of course, that’s only true if the government doesn’t allow energy companies to compensate energy costs for these energy-saving methods.

Do a little searching on the internet and you’ll see that the Zuerchers aren’t the only ones having problems like having 4 out of the 16 bulbs they bought failed earlier than what they thought. So in the rush by Big Environment and Big Government they didn’t think out the issues. For example, those 4 bulbs now need to be disposed via approved EPA procedures (note that the Zuerchers live in California where they average 1 disposal facility per county). At this rate, what’s the recovery costs? And don’t forget that CFL’s cost more to manufacture. And all of this while we’re facing an economic downturn? Maybe there are better alternatives?