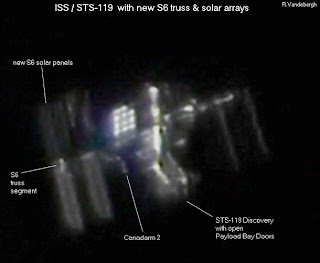 Unfortunately, I’ve missed the opportunity to try to catch the ISS & Shuttle as they fly overhead since the deployment of the new trusses.  The ISS will be the brightest object in the night sky (apart from the Moon) once the trusses are complete.  An astrophotographer, Ralf Vandebergh, caught the image on the left from the ground using a 25cm telescope and a video camera (click for a larger version).  Augmentations to the picture courtesy of Discover online.

I’d encourage everyone to take a minute and find out when it’s passing over your area and then go out, bring the kids and take a look.  If you’ve got binoculars, use them for an even better.