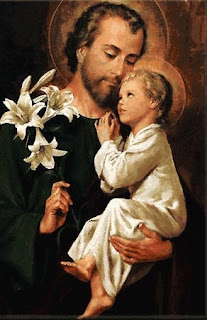 But Happy St. Joseph’s Day to everyone.

To a certain extent, I think the Catholic Church has relegated Joseph to a lesser role than he deserves but it has maintained March 19th as a solemnity.  It always falls in Lent but according to Canon Law, abstinence is not required due to its stature as a solemnity.

Holy Joseph,
Pray for us.