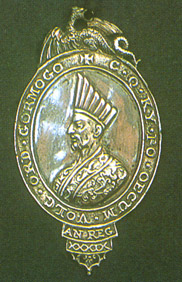 Your Czar is not one to whine, Andy Rooney-like, about the inconveniences of modern living, but the Czar has just paid some bills, and since the Gormogons have seen fit to reward him with blog-like powers, the Czar shall use them as a bully pulpit.

These are not rants and rails about taxes, and how every bill the Czar once paid for $98.27 each month is now $104.81 with no changes in service. No, these are mere questions for those who produce the actual invoices themselves.

Is it necessary for your envelopes to have a massively ornate reminder that I need to place postage on the envelope? The Czar understands that many bill payers neglected to use stamps in the days before you did so, and therefore appreciates the monthly reminder on how the postal system works. But please realize that the typical first class stamp is less than an inch-square, and your cubit-by-cubit box reminding me to use a stamp, accompanied with directions on using electronic payment, and a reminder to see other reminders on the other side of the flap result in my small stamp dwarfed by something barely patched over. It looks plain sloppy.

Second, can we review account IDs? The Czar lives in Muscovy, a smaller community. Yes, we use a small local service for water, and a small local service for trash pickup. Perhaps, I suppose, there are less than fifty-thousand customers possible in a lifetime. So why, then, is our account number a blisteringly long thirty-five digits, most of which are zeroes? This is something of course we must write each month on the check, in that small memo line. Curiously, the Czar’s cell phone service provider, which has tens of millions of customers, is able to identify our account with a handful of digits (ironically, less than the actual phone number). If they can find one individual out of 30 million with a small number of digits, the odds are good Muscovy can find an individual with less than thirty-five digits. Even given your account system could be in use for decades, Muscovy will probably never support ten decillion residents to justify an account number that long.

Finally, the Czar uses Comcast for cable television, and salutes their recent generous offer to download three free top-line movies on demand for free. The Czar dutifully clipped the small, rectangular coupons you sent, and read the directions that required him to write his name, address, account number, movie title, and date downloaded in order to receive credit on the next invoice. The Czar understands the need for the information, but is curious as to why the coupons themselves were treated with some impenetrable wax-like compound that made it impossible to write on them with ball point, pencil, gel pen, marker ink, Sharpie, highlighter or El Marko. Instead, the Czar resorted to etching the information in by repeatedly scratching the coupon face with a razor-fine Uniball until it appeared like a mocking message to police written on a murdered celebrity’s bathroom wall. Loved the three free movies, but hesitates on recommending your card stock supplier to Gormogon readers.