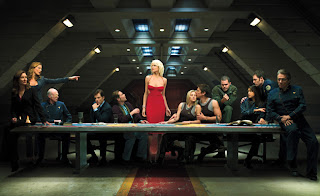 Overall, I have to admit that I really enjoyed the finale of Battlestar Galactica. It was a show that took risks and provided a unique diversion on TV at a time when I think TV was doling out rather mediocre products. It started (in the United States) in January of 2005 and concluded last Friday. During this time, TV has been dominated by cheap reality shows which I find largely boring. While it was not envisioned in the way that Babylon 5 was with a full storyarc start to finish that was largely pre-scripted including the minor subplots. Instead Ron Moore had guidelines and a framework for the show. They remained committed to strong characters who drove the storylines. Yes, there are unanswered questions and maybe, in viewers’ eyes, some inaccuracies or plot holes. It meandered in quality from time to time (parts of season 2 and 3 had me doubting it). But even the crazy David Frost and David Lynch team on “Twin Peaks” back in the 80’s had that problem – particularly in season 2 where every other eipsode was borderline garbage. Having said all that, I believe that BSG was one of the better science fiction shows that I’ve watched.
So before you read more, please note that I will be giving away parts, so if you care, please ignore and read some other post here. I will take a page from Mrs. GorT’s book that a good show or movie holds up even if you know parts or all of the ending because the characters, the writing and the story are just that compelling. How many times have you watched Casablanca, The Godfather, or Star Wars (the *real* first one, but for those kool-aid drinkers, Episode IV: A New Hope)??

My biggest complaint about the finale was the sense that it was rushed or jammed into the 2 hours and 11 minutes. I think that it would have been cleaner to end at the point that Galactica jumps from the Colony and then air a slower-paced dénouement in a subsequent episode. I had some reservations about the rest of the “skin-job” Cylons that were on Galactica – as we didn’t see any on the “final” Earth aside from the main ones. I think a lot of people are over-analyzing the finale and the threads that were pulled together (to varying degrees). I’ll pick on two elements where I think other blogs have taken a wrong turn:
First, what is Starbuck? Starbuck died at the “eye of Jupiter” and was “sent back” to help the colonists. She is not an “angel” much like the 6 and Baltar we (and they) see during the finale. She is different in that she physically interacts with the ship, numerous people, etc.   So, I believe that “god” (meaning the deity in the BSG universe) sent her back to help the colonists in their time of need.
Second, I think Cavil’s suicide was weak – I’m not sure where the writers or those interpreting it are going. Cavil’s character has an obsessive hated of/for the “final five” – it was his overarching drive and motivation. If I were directing,  Cavil would have tried to kill the remaining four of the five before or instead of eating a bullet. He likely recognized that he lost access to the machine-like “resurrection” when Tyrol broke Tory’s neck. He preached on in previous episodes to Ellen that he wanted to continue to torture them for what they did to him making him so “human.” But instead, the 10-second fix was for suicide.
There was so much done well, though. As just referenced, Tyrol’s reaction during the “communing in the pool of goo” was excellent – I didn’t see it coming even with Tory’s foreshadowing lines. I completely forgot about the Calle plotline. And I really like Commander Adama going into exile. I know other disagree, but I took away that this was a continuation of the shedding of the past. Almost a Moses-like self-banishment from the opportunity to participate in the new world after successfully getting the colonists there. Plus, it symbollically heralds back to the start of the series where Galactica, herself, was being retired. About the only issue I take with this is that he comments that he didn’t have enough time – presumably with his son, Lee, which given the situation he would have plenty now. But I think the “retirement” theme worked well enough.
Maybe it coelesced in other viewer’s heads and Moore, et al achieved it more subtly than I pictured but given the chance I would have had a montage sequence that transitioned the 150,000 years that passed at the end of the finale. In this sequence, I would have shown civilizations starting with glimpses of people that look remarkably like Athena/Boomer/8’s, the 6’s, Baltar, Lee Adama – maybe as historic figures a la Alexander, Marie Curie, and the like. Maybe even a few humourous ones. Also as part of the montage, a tie to the possibly-alien-influenced belief behind the Incan/Mayan temples, the pyramids, Stonehenge and Easter Island.
However, the bottom line is that there are vast dryspells between really good shows on TV these days. BSG, I would posit, is one of the better ones in recent history whose plotlines and twists will be discussed for a while to come.  Overanalyzing the show does little when really, I’m in it for good entertainment value, which I fully received.
As a side note – the finale was full of good previews: the new Star Trek movie (although it might be hard to get over Heroes villian “Sylar” as Spock) and Warehouse 13, a new series on the SciFi (soon to be SyFy – ugh) channel, which looks promising – if you watched the series “Friday the 13th”, I think you’ll like it.