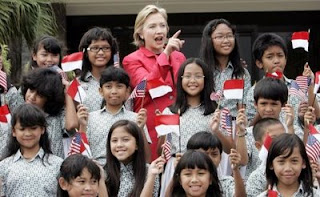 Question: How long until traditional Obama backers start decrying the policies, speeches and efforts by the Obama Administration.

The economy is spiraling down at an accelerating pace, threatening to undermine the Obama administration’s spending plans, which anticipate vigorous rates of growth in years to come. A sense of disconnect between the projections by the White House and the grim realities of everyday American life was enhanced on Friday, as the Commerce Department gave a harsher assessment for the last three months of 2008. In place of an initial estimate that the economy contracted at an annualized rate of 3.8 percent — already abysmal — the government said that the pace of decline was actually 6.2 percent, making it the worst quarter since 1982.

Second case in point, Amnesty International, et al. Hillary Clinton said that the U.S. is not going to press other countries on Human Rights issues. Specifically, she said, “can’t interfere with the global economic crisis, the global climate change crisis and the security crisis”. So, Sec. Clinton, if the Chinese decide that they need to have child labor in sweat shops to make cheap goods to help bolster their economy, then we won’t stand in their way or interfere with it. Really? This is where this administration is going? Amnesty International USA and other Human Rights groups are rattling the cages over this one. Personally, I think it’s worse, in that she’s going to push us to cow-tow to China (examine the Clinton history with that country for a moment) and this is just a step towards it.

Maybe elements of what your Gormogons have pointed out are starting to ring true. Maybe someone is getting it. Although, as evidenced by a recent exchange with a liberal, there are those still carrying the water for POTUS Obama:

GorT: “You (liberal person) and I both say that there’s pork in the Stimulus Bill but Obama claims that there’s none, no earmarks or wasteful spending. So who’s right?”

Liberal: “We’re right. He (Obama) must mean that there’s relatively little or no pork“

Of course, I’m sure we all made that assumption. Talk about a disconnect.