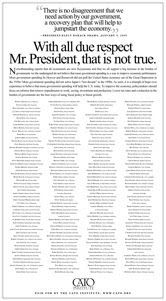 Poor Dr. Johnson to be dragged into all this, but the quote is appropriate…