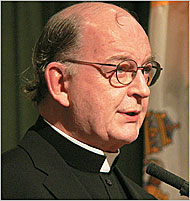 Richard John Neuhaus, arguably the most important—and easily the most prolific—public intellectual on religious issues over the past two decades, is said to be on his death bed. Fr. Neuhaus (a Lutheran minister who converted to Catholicism) has done more to advance intelligent discourse about religion, secularism, and the proper relationship between the two. An associate of Martin Luther King, he crossed to the right some time after crossing the Tiber—or, perhaps, better said, like most neo-conservatives, the left went left and left him behind. He founded First Things, the leading journal of religious affairs in America—and probably the world. He authored numerous books, most famously The Naked Public Square.

His Death on a Friday Afternoon is a profound meditation on the Seven Last Words of Christ the Volgi has read more than once. Most personally affecting to me, perhaps, was the The Eternal Pity, a collection of meditations on death from various great writers and works of literature and scripture from various cultures. Stemming from his first encounter with potentially lethal cancer, the book is the least depressing, most comforting, most intelligent look at the inevitable fate we all share I’ve ever run across. His preface alone is worth the price of the book.

The Eternal Footman seems to be holding Fr. Neuhaus’s coat, and if, as Warren Zevon said, his ride is here, we pray for a good and easeful death for Father Neuhaus.

May he and all the faithful departed, through the mercy of God, rest in peace.