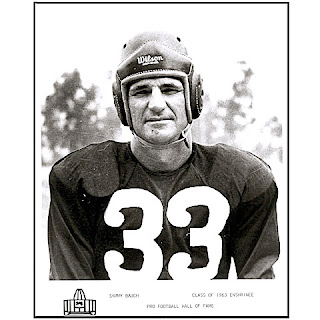 Sammy Baugh is dead at 94. For those who would doubt the assertion in the subject line, consider the following (insert “arguably” if you want to be a pedant).

Baugh was an obvious choice for the Hall of Fame’s first class and is routinely named one of the top pro and college players of his time and all-time. He also had a sense of humor and irony. When asked after the Redskins’ 73–0 destruction in the NFL championship by their arch-rival Bears (using Clark Shaughnessy’s revolutionary T formation), if the touchdown Charlie Malone, one of his receivers, dropped early on would have made a difference in the outcome, had it been caught, he replied in his Texan drawl, “Sure. It would have made it 73–7.”

On a personal note, the Volgi’s step-uncle caught a pass from Baugh in 1948 when the Redskins’ star visited the city champion Central [now Cardozo] High School team. Now 80, he says he can still feel how much his hands hurt. (Central beat Gonzaga, for those keeping score in D.C.)