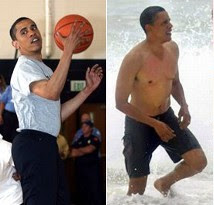 Apparently when a republican president has a exercise routine that most of us are probably envious of, it’s a bad thing.  So bad, we get commentary from the media like: “What I mean is the fact that Bush has an obsession with exercise that borders on the creepy” (Jonathan Chait, LA Times on Bush running 3½ miles a day and encouraging more cross training to a judge).   Even the elder Bush was attacked for placing Arnold Schwarzenegger as the chairman of the Presidental Council on Physical Fitness and Sports.  But when a democrat has a rigorous workout regimen, the praise is lauded to the point of a romance novel with quotes like, “The sun glinted off chiseled pectorals sculpted during four weightlifting sessions each week, and a body toned by regular treadmill runs and basketball games.” (Eli Zaslow, WaPo).  As pointed out by Michelle Malkin:

Chait argued that Bush’s passionate devotion to exercise was a dereliction of duty. “Does the leader of the free world need to attain that level of physical achievement?” he jeered. “It’s nice for Bush that he can take an hour or two out of every day to run, bike or pump iron. Unfortunately, most of us have more demanding jobs than he does.”

Does this magically not apply to President Elect Obama?  Ms. Malkin goes on to point out that Chair’s piece isn’t alone in criticizing Bush’s exercising schedule – other journalists have written similarly and the noted protester Cindy Sheehan has as well.

Will the bloom come off the rose?  Are some in the mainstream media so invested in Obama’s success that they will continue to blatantly sugar coat every report and toss up softball questions?  Where is the Fourth Estate?