↓
Home→ACORN→Where’s Joan of Arc When We Need Her? 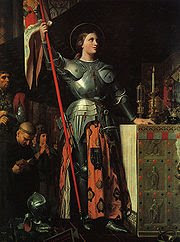 Finally the Catholic Church has announced that it is cutting off funds to ACORN. Apparently, the history of voter fraud associated with ACORN wasn’t enough to deter the Church (via the Catholic Campaign for Human Development [CCHD]) from creating relationships with 40 to 45 local ACORN affiliates. However, now, funds from the Catholic Church are co-mingled with other donations to ACORN and it is difficult for us to truly know whether funds from the Church were used for political efforts. The Church needs to be more cautious in the groups it funds for charitable work. Clearly, the CCHD and other organizations like it are doing good work that the government is too ineffective in doing. But it should be a big red light when an organization has even the whiff of polticial activity and, more so, fraudlent political activity. We need a new Inquisition that would take no prisoners (in its search for the truth about the funding efforts by the Church). Maybe some old-school Soldiers of Christ are needed.