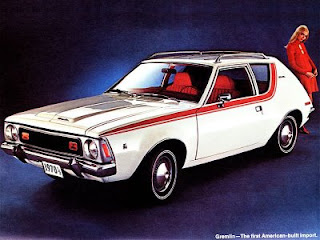 Well besides the lovely car pictured on the right (that’s an AMC Gremlin), here is a huge reason not to provide bailouts to the auto industry:

Thousands of laid-off auto workers get paid $31 an hour to sit around and do nothing all year under a controversial program that could continue even if American taxpayers bail out the American auto industry.

The program, called “Jobs Banks,” has been around for 24 years. Some of the employees at jobs banks choose to do community service, but others do crossword puzzles and watch TV all day — or just stare at a wall. If you’re a laid-off auto worker, it’s what comes with your pink slip, thanks to a deal struck in 1984 between the United Auto Workers and the Big Three carmakers.

Again, while there was a need for unions many years ago, I think we’ve moved beyond the need for the current implementation of such. We have the UAW pulling this crap, the Teacher’s Union with the filthy rich leader earning a ridiculous salary from public funds while not improving our education system (it would be another story if the US Education system was second to none…or at least improving). When will the outcry begin? Maybe we all need to drink some of this and take them on! (They have one of the funniest radio ads I’ve heard in a long time)