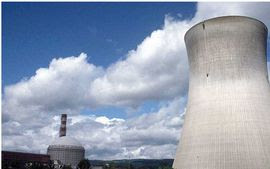 I’m just waiting for Big Environment to put the kibosh on this effort: A small New Mexico startup company, Hyperion Power Generation, has plans to put small, tamper-proof, self-regulating nuclear reactors in people’s backyards…well, ok, maybe just somewhere in your local town of 10 to 20 thousand homes. The goal is to provide 10¢ per kilowatt-hour energy anywhere in the world, according to Hyperion’s CEO. At an estimated $25 Million per unit, capable of powering 20,000 average homes for 7-10 years, it starts becoming affordable. The reactors are installed underground and as they near the end of their operational window of 7-10 years, they are dug up and hauled back to a factory to be refueled. These reactors are based on clean, safe technology that is the same as the reactors at most American universities. Other companies are working on similar approaches. Read here or here for more.

This is the kind of innovation that will improve America and the world. Hopefully, the government and special interests groups won’t get in the way.