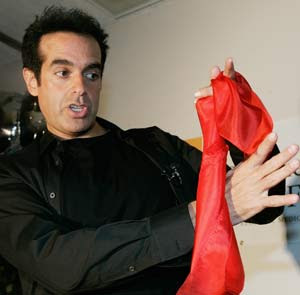 … to the past of the man running for President (it’s all smoke and mirrors…or an “illluuuuuusion”). That’s what it seems like the press and the Obama supporters are pushing. I think I’ve been clear in the past that I think we have a dearth of good leadership in this country. Neither McCain nor Obama did much more than spew their campaign ads in the 2nd debate and showed little else. So as we march ever closer (now, under a month) to election day, more news is coming out about Sen. Obama’s past. It turns out that Sen. Obama was part of the “New Party” formed by the Democratic Socialists of America….but his campaign and supporters deny it. Well, us geeks have ways. The Web Archive Project captured some evidence and there’s evidence in other places. Now, be careful, I don’t view this as a desperation move to smear Sen. Obama – it’s fact. We know all sorts of things about Sen. McCain’s past. The dems are quick to bring up George W. Bush’s sortid past. So why can’t people ask about Sen. Obama’s?? Is it out of fear that something really bad is lurking there?

I can only think of two options that this evidence presents: Sen. Obama will do many things, say many things and associate with many people in order to get elected and/or Sen. Obama is a socialist but his “handlers” are afraid of making that public. Neither is palatable. In the first case, we would have a President who would be wooed easily by special interests in order to advance his position. In the latter case, we are potentially electing someone who is at odds with the current government structure of the United States (representative democracy) and who is actively obscuring his true beliefs.

The knee-jerk reaction from liberals I know has been to ad-hominem attack this or deflect the issue and make some claim about Nixionian or Rovian attack policies but it hasn’t been to address the issue directly at hand: Who is Sen. Obama?