↓
Home→NASA→The Future of US Space Exploration 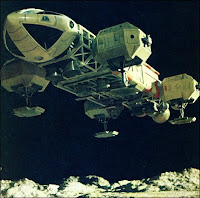 With a little prodding from the Volgi, I decided to write about what we can look forward to with regards to our country’s space program. In light of the Chinese and Indians making advancements and the current economic situations, it is my opinion that we need to revitalize our endeavors in space. The current plans have the U.S. relying upon the Russian Star City launch facility and the Soyuz launch vehicle for getting U.S. astronauts to the International Space Station. From 2010 (the planned end for NASA using the shuttles) until 2015 (the start of the Orion program where the U.S. aims to put astronauts back on the moon), the American space program will have no capability of launching personnel into the great black void.

Both presidential candidates have wavered around on the future of NASA and the government budget so I doubt things will change. NASA’s budget is a shoestring and it doesn’t appear to be getting any better. My opinon is much like my take on many government programs, it’s time to infuse some private sector help (i.e. Space X). No, hopefully, we won’t be watching Andy Griffith launch a garbage scow from a junkyard, but I do hope that a broader focus is placed on space exploration within the U.S. Don’t get me wrong, NASA as a government institution was what was needed in the 1950s and 1960s…but we need to become more efficient in this push. The “Space Race” gave the world the greatest rate of innovation we have ever seen – things like powdered drink mix (Tang) to velcro to advances in computers all stem from it. It has been 35 years since we’ve seriously pursued the Moon.

Many will decry this as throwing money out the window, but I would offer an alternative view that if pursued well, we would increase the focus on math and various science fields within our education system, would create a host of new jobs, and would stimulate another wave of innovation that could lead to medical (cancer, tumor, etc.), engineering and biological (food creation) breakthroughs. I’m not saying we need to throw in the kitchen sink towards this, but more than $18 billion for sure and encourage the private sector to kick in as well. Plus, where are we going to live when the “all human”-caused global warming (according to VP-hopeful Sen. Biden) makes Earth uninhabitable?