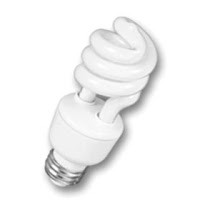 Ok, with that weak reference to Luke Perry’s fine acting skills in The Fifth Element, I wanted to rant about CFLs. That is Compact Fluorescent Lightbulbs. Did you know that 400 senators and representatives voted last December to ban incandescent lightbulbs by 2012. Did you know that by passing that law our elected representatives have chosen the $3 per lightbulb CFLs as the only choice for consumers rather than the $0.20 regular bulbs? Are you aware that the claim of extended lifetimes on these new bulbs come with some caveats? First, they have to remain on for prolonged periods of time. If they are turned on/off for only short periods, say 5-10 minutes, then their lifetimes are reduced to the same as incandescent bulbs. Think about the short usage rooms in your house – the bathroom (better bring some reading materials), a closet, the garage, outdoor motion detectors, etc. Second, it is “up to” 10,000 hours. That doesn’t mean that you’ll get 10,000 hours.

There are other things to consider – there is quite the multistep process to clean up a broken bulb according to the EPA, there are few recycling centers (however, Home Depot apparently will take the old ones), and incandescent bulbs near 100% efficiency. In moderate to cool climates where the energy that isn’t converted to light is converted to heat and directly contributes to the building or home’s heating.

It is too bad that we’re “allowing” our government to represent us like this. Shouldn’t we as consumers have the ability to choose? Shouldn’t I be able to put the regular bulbs in short duty-cycle locations and put CFLs where they would do better? Hey, free market economy, that sounds like a great idea.