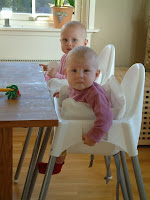 The democrats will learn someday that being petty, complaining about everything under the sun, and labeling everyone isn’t a winning strategy. After the McCain campaign aired the congratulatory ad, the Obama camp first responded to the naming of Gov Palin as the GOP VP candidate with this:

Now, only after feeling the heat for their poor response issued this statement:

“We send our congratulations to Gov. Sarah Palin and her family on her designation as the Republican nominee for vice president. It is yet another encouraging sign that old barriers are falling in our politics. While we obviously have differences over how best to lead this country forward, Gov. Palin is an admirable person and will add a compelling new voice to this campaign.”

And they want to be leaders of this great country? Nice way of demonstrating their ability to lead and deal with opposition. I can’t wait to hear their diplomacy. I think it’s becoming more and more clear that the Obama/Biden campaign is one of little substance and a lot of show. Look at the staging on Thursday night in Denver. It’s all contrived. Obama preached he’s for change, so he picks a Senator who has been in DC politics for 35+ years. Palin went to Iraq as governor of Alaska visiting Alaskan National Guard troops that were deployed…and Obama, well he finally went. The democrats will offer up grandiose ideas with no substance, just like the last 2 years of the self-described “most open, honest and ethical Congress” has. It’s more of the democrat do-what-we-say, not-what-we-do and we know what’s good for you. I’m sure we’ll hear more of their favorite attack target: “Chimpy McHilterburton” because they can’t run against the people actually in the race, they are too focused on their hatred of George W. Bush. And you know where hatred leads: “…hate leads to suffering” [Yoda].