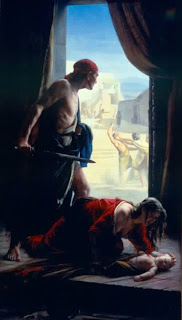 Over at NRO‘s The Corner, there’s been an ongoing discussion about The Good Junior Senator From Illinois’ (“The GJSFI”) support for infanticide and the media’s reluctance to accurately report on this pro-infanticide position. This post by Yuval Levin makes the point nicely.

‘Puter thinks the media rationalizes its downplay of theis relevant story by convincing itself that the rubes in the heartland would misinterpret The GJSFI’s delicately nuanced position on this issue. The GJSFI isn’t anti-child, he’s pro-woman, and the hicks from the sticks are too stupid to get it. This is, in the immortal words of Col. Sherman T. Potter, horse hockey.

‘Puter thinks Big Media is scared to death of this story because Big Media knows the truth. Joe and Jane Sixpack viscerally understand this issue. It’s that simple. The GJSFI voted in favor of a law that permitted doctors and hospitals to leave a born, living child to die, whether through starvation, exposure, dehydration, lack of treatment or whatever. Period. End of Story. Joe and Jane Sixpack, regardless of political stripe, know abandoning children to die is intrinsically evil. Joe and Jane Sixpack also understand, better than many in Big Media, that real evil exists. They are unlikely to support any politician in favor of infanticide, and no “nuance” or “big picture” argument will sway them.

So, Big Media is facilitating the spread of evil by preventing The GJSFI’s support of infanticide from becoming widely known, convincing itself that serving a false prophet pitching Hope and Change offsets its most grave sin.

*For those interested, the painting is Carl Heinrich Bloch’s Slaughter of the Innocents.