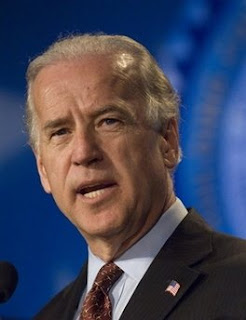 ‘Puter was a little surprised that the The Good Junior Senator from Illinois (D-IL) chose The Good Senior Senator From Delaware (D-DE) as his running mate.

After all, Sen. Biden once referred to Sen. Obama as “the first mainstream African-American who is articulate and bright and clean and a nice-looking guy.” Not exactly post racial rhetoric. Sen. Biden also said that Sen. Obama is “not yet ready for the presidency.” Could this be any easier for the Vast Right Wing Conspiracy Attack Machine?

Remember the Super Bass-O-Matic ’76 from the old SNL skit? Well, Sen. Biden’s the real deal: a Super Gaffe-O-Matic ’08. Maybe Sen. McCain (R-AZ) can roll out Gov. Jindal (R-LA) to answer Sen. Biden’s observation that “you cannot go to a 7-Eleven or a Dunkin’ Donuts unless you have a slight Indian accent.“

Additionally, and not a small thing, Sen. Biden is a serial plagiarist. Sen. Biden admitted to plagiarism while in law school at Syracuse. Also, in 1987 while running for the Democratic presidential nomination, Sen. Biden lifted wholesale portions of British politician Neil Kinnock’s writing.

Biden’s from Delaware, too. Not exactly a swing state these days, nor an electoral vote powerhouse.

On the upside for Sen. Obama, Sen. Biden is experienced in foreign affairs and has been on the national stage for many years. This may help plug the perceived experience gap in Sen. Obama’s resume.

Lord knows Sen. Obama needed a veep pick who had ANY sort of experience whatsoever, particularly in foreign policy. In theory Sen. Biden doesn’t seem to be the best veep pick Sen. Obama could have made, but in reality Sen. Biden may have been Sen. Obama’s only pick. The Democrat selection pool was a mile wide and an inch deep, full of unserious people with dangerous “solutions” to America’s current difficulties.