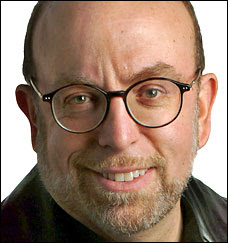 From reading Harold Meyerson in today’s WaPo. ‘Puter should know better than to read the musings of a proud bi-coastal progressive, but ‘Puter is weak.

Obama needs to extend the Democrats’ historic concern for fairness beyond racial minorities, women and gays to an abandoned working class.

Oh. I guess Mr. Meyerson must’ve missed Sen. Obama’s promise to unilaterally renegotiate NAFTA. And Sen. Obama’s promise to remove the secret ballot from workers in order to make unionization of workplaces easier. Maybe Mr. Meyerson’s on to something here. Maybe Obama could take a bunch of ideas focused on helping the working man, and put it into a plan. ‘Puter knows! Obama could call it Obama’s Plan for America and put it on his web-thingy on the interwebs!

Next, Mr. Meyerson urges a move to China-style government control of the economy. At least ‘Puter think Mr. Meyerson does. It’s difficult to tell from this convoluted passage.

Will America ever get its manufacturing back? Not unless we move to level a steeply tilted playing field: China and a host of other nations offer generous subsidies to companies locating their plants there, while the United States shuns such mercantilist strategies. But even if we moved toward mercantilism, we’d still have to confront the global economic order of the past quarter-century.

‘Puter thought he knew what mercantilism was, but just to be certain, he looked it up. Sure enough, mercantilism involves “strict governmental regulation of the entire national economy.” To be fair, ‘Puter used the second definition, but the first definition seemed inapplicable because ‘Puter’s fairly certain the United States is already aggressively pursuing commercialism.

Last, Mr. Meyerson lets the Progressive fixation with race show through in a stunning admission.

As it happens, the Americans most affected by these changes are the Americans most able to sway the outcome of the presidential election: the beleaguered workers of our onetime industrial heartland. Barack Obama can claim the allegiance of the black workers so affected, but it’s the white workers clustered in these swing states who will determine our next president.

Wow. Nice to see Progressives admit that they think Black Americans will vote for Sen. Obama based solely on the color of his skin, not the content of his character. Dr. King would be so proud of today’s Progressive movement.

Great to see such trenchant commentary getting play in the Nation’s Capital’s major daily newspaper. They have these things now called “editors.” Perhaps the WaPo would like to contact ‘Puter and request his services?