↓
Home→Creedence→Look For The Union Label 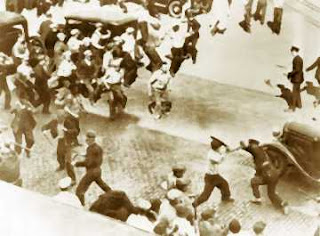 And there you’ll find corruption and un-American acts. ‘Puter will take a look at two separate items that recently caught his attention, one from his adopted dysfunctional home state of Nueva Jork (motto: “What’re you lookin’ at?”), and the other involving the universally beloved U.S. Congress.

First, New York. In order to deal with a looming budgetary crisis, Governor Patterson has called the legislature into special session to trim $600 million out of a $124 billion state budget to deal with a projected $6 billion budget gap, projected to balloon to $26 billion in the next three years. This is a half of a percentage point in overall spending, which has increased 5% this year alone, twice the rate of inflation, despite ominous projections prior to passage that revenue would likely not match spending. But to hear the union hacks tell it, we’re killing children and the elderly. To wit, from the New York Post,

This request for a wee bit of fiscal restraint has caused the public workers’ unions, among the biggest lobbyists in Albany, to squeal like pigs. Mind you, Governor Patterson has not proposed spending less than last budget year, only a decrease in the rate of spending growth. The public workers’ unions nicely epitomize the greed summed up by John Fogerty’s anti-war anthem Fortunate Son, because “when you ask them, how much should we give, … they only answer more! more! more!”

Another union ploy to hang on to its ill-gotten pelf has been to fight a proposed property tax cap related to school taxes. The proposed tax cap has passed the Senate and awaits action by the Assembly. The Senate’s property tax cap restricts growth to 4% a year. However, taxpayers can vote to override the cap with 55% of votes for a budget exceeding a 4% increase. New York State United Teachers (proudly spending your money on contract featherbedding since before Tammany Hall) reacted with anticipated hysterics. As noted in the Buffalo News,

“The message is that the tax-cap legislation proposed by the governor and supported by the Senate would decimate our public schools, and we can’t ask our members to work for candidates who would take such an action,” said Richard
Iannuzzi, the union’s president.

Mr. Iannuzzi further explained that controlling spending by implementing a cap is a “moral issue.” I couldn’t agree with Mr. Iannuzzi more. Lowering property tax increases to a rate that doesn’t send young workers and businesses fleeing the state, and that permits retired citizens to remain in their homes, is a moral issue. I fear though that Mr. Iannuzzi was really talking about preserving his minions’ seven hour per day jobs with a 180 day work year, constitutionally guaranteed pension benefits, exorbitant health benefits and a job for life. No one thinks that teachers have it easy, but is it really immoral to ask teachers to feel the pain every private citizen is feeling? ‘Puter thinks not, and knows that deep in his heart, Mr. Iannuzzi knows it as well.

So, in sum, New York public sector unions think that taxpayers should continue funding their pet projects (primarily high salaries and benefits unrelated to merit) regardless of the sustainability of maintaining spending at such a level.

Perhaps all the state level union leaders should take a page out of Adam Urbanski’s book (president of the Rochester Teachers’ Association), who, when asked about the crushing tax burden on Rochester taxpayers is rumored to have responded “If you kill the cow, no one gets any milk.”

This post is already too long, so ‘Puter will save his wisdom on Congress’ kow-tow to the unions for later in the day.