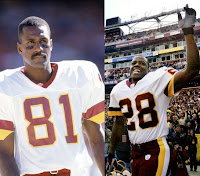 Let me add my congratulations to GorT’s to Art Monk and Darrell Green, two of the emblematic—perhaps the two most emblematic—personalities of the first, great Joe Gibbs era in Washington. Both men were consummate professionals, utterly dedicated, profoundly humble, and incredible athletes. Not a little of this can be traced to their bedrock-solid upbringings and their deep adult religiosity, the latter reflected in the testimonies to their relationship to Our Lord that they spoke about at length—too much length for the Volgi’s taste, but chacun à son goût and they’ve certainly earned the right and will never have such a stage again.

On to football. Green was a shutdown corner before there was such a phrase, arguably the greatest ever to play the game in the modern era, as Thomas Boswell points out in the Washington Post with a comparison to the man usually held up as the ne plus ultra:

Go on, say, “But Darrell wasn’t Deion Sanders.” Maybe not. But both started on two Super Bowl champions. Green had 54 career interceptions, five in the postseason, to Sanders’s 53 and five. Green had eight defensive touchdowns, two in the playoffs, to Sanders’s 10 and none. Green averaged 15 pass deflections a season to Sanders’s 11. Green made seven Pro Bowls to Sanders’s eight. In his first dozen seasons out of 14 overall, Deion averaged 38 tackles a year. In the first 17 of his 20 years, the much smaller Green—who liked contact much more—averaged 64 tackles.

Green played cornerback—the position most demanding of speed and quick reflexes—for an unfathomable twenty years, almost uniformly at a stellar level. Green’s one relative fault was his hands. My brother once justly observed, watching Darrell break up an interceptable pass, “You know, if he could catch, he’d have the interception record by a mile.”

The real story was, however, the long-standing rejection of Art Monk by the Hall of Fame committee and their finally relenting and recognizing a career that was contemporaneously universally regarded as a mortal lock for Canton. An informal campaign of fans and sportswriters organized to press Monk’s case once it became clear he might not make it, notable among them the Post‘s Len Shapiro and Michael Wilbon in the latter group and Ted Jou and Tom Kerchival in the former.

What was the fuss about? For those who came in late, click here and enjoy Kerchival’s tremendous video demolition of the case against Monk’s induction. The featured testimonial video is very good, but the meat is in the Case for Monk series just below it, which specifically refutes the arguments publicly cited by committee members for rejecting Monk the first seven times around.

The four-minute four-second standing ovation Monk received was unprecedented at a Hall ceremony and an outpouring not merely of affirmation of his overcoming the admission committee’s long-standing standoffishness but of the love so many Washingtonians developed for Monk, a model football player, citizen, and man, over his lifetime around D.C., as was the sea of burgundy and gold which swamped the Canton stadium. Tom Jackson and Trey Wingo, hosting for ESPN, stated they’d never seen anything like it in all their years covering such ceremonies—including the huge turnout of Broncos fan for face-of-the-franchise-quarterback John Elway. Well done, Washington. And well done, Mr. Green and Mr. Monk.