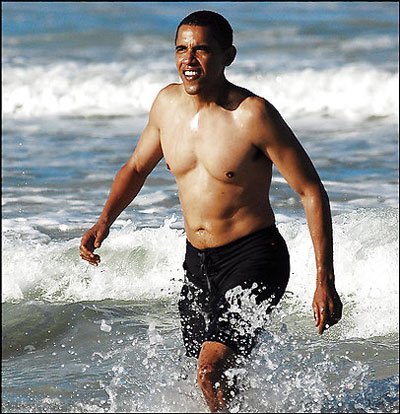 Sen. Obama, Constitutional Ignoramus or Jackass? And no fair choosing both.

The Good Junior Senator From Illinois (hereinafter, “The GJSFI“) is a proud graduate of Harvard Law School, where he edited the Law Review. Distinguished constitutional scholar Laurence H. Tribe is a member of the Harvard Law School faculty, and may have taught the GJSFI. The GJSFI himself once taught Constitutional Law at the University of Chicago. The Gormogons have put one of his Con Law exams up for review, and ridicule. Leaving aside politics for a moment, ‘Puter was momentarily stunned, then enraged when The GJSFI blithely referred to President George W. Bush (who gets no love from ‘Puter either) as “John McCain’s president, George W. Bush.”

All kidding aside, the asininity that somehow the sitting president is “not my president” has got to stop. It sounds stupid and petty whether it comes from KosKids in reference to George W. Bush or the Buchananites referring to William J. Clinton. Look, [insert hated president here] is/was the president whether you like it or not. Your guy lost. Deal with it.

And for a presidential candidate from a major political party to pull this garbage is inexcusable. It may excite your base, GJSFI, but it diminishes you personally and professionally. ‘Puter calls on The GJSFI to reaffirm or retract his statement that implies George W. Bush is not his president. As if the GJSFI or his campaign staff read The Gormogons.

And for Sweet Baby Jesus In The Manger’s sake, no non-apology apology, please.