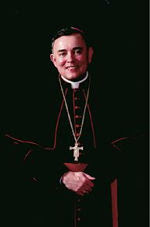 Archbishop Wuerl of the Archdiocese of Washington, D.C. recently castigated Speaker of the House Nancy Pelosi (D-CA) for her comments on Meet the Press that misrepresented Church teaching as to when life begins.

Archbishop Chaput of the Archdiocese of Denver took down presumptive Democratic vice-presidential nominee Sen. Joe Biden (D-DE) for his pro-abortion position. Archbishop Chaput went so far as to state that Sen. Biden should not present himself for Communion.

Would that more Cardinals, Archbishops and Bishops would uphold Church teachings in their flocks.