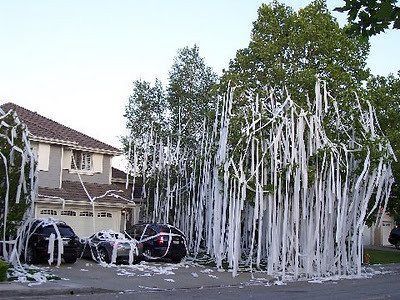 Also, what’s the point of this? Doesn’t this strike you as, well, kinda stupid?

As one gets older, one tends to skew to a cranky disposition. The Czar was born in the mid-1200s, making him quite old and quite cranky. But that never means he’s wrong, and we do have a bit of a rant today.

In Muscovy, we are experiencing this year’s homecoming, in which our cherished high school will almost certainly add to its losing record by humiliating itself like an Irishman at his new employer’s holiday party open bar. This involves all the rich traditions associated with homecoming: a parade, a performance by the rather good marching band, an old-fashioned dance (skirts for ladies, ties for gentlemen), and lots of parking-lot grilling.

Let the Czar make this clear: not all traditions are good. Like throwing eggs at homes on Halloween, birthday spankings, or lynching newly freed Republican voters in the South, some traditions need to be ended now. You can guess that this is one of them.

“Oh, Czar,” you say, before our axe swings horizontally at your neck, “TPing homes is a harmless thing. It’s all in good fun.”

Look, at its simplest level, this is vandalism. Decorating a shrub or bush or two is one thing, but some homes are positively draped, requiring ladders, tools, and a lot of effort to clean up. It isn’t fun. It’s as much work as repairing a broken window or replacing a burned section of siding.

Additionally, it hurts the homeowner. The Czar’s neighbor got hit last night; she’s a single mom with a cheerleading daughter, hence her victimization. The mom had to stay home this morning to clean up; she was furious, as she was late to work at a job that doesn’t tolerate it and they’re docking her pay. This hurt her financially simply because of this harmless thing. The Czar spotted another neighbor whose home was hit even worse. He just stood there, staring at it, not knowing where to begin—the guy was also not going to be at work on time. For many people, being late means missing a critical meeting, losing a sale, or blowing a presentation.

And make no mistake—not only could the kids be arrested for trespassing and vandalism, there’s a good chance that—in a couple years’ time—some adolescent toilet paper hurler is going to catch a bullet in the brain. Picture some senior citizen napping in his chair at 2AM; he wakes up to hear a bunch of people running across his lawn, and in a panic, grabs his firearm thinking he’s facing a home invasion.

What irks the Czar isn’t that teenagers are stupid-ass morons; this has always been true. What irks the Czar is that a bunch of kids don’t sneak out of the house between 1 and 2AM and take off in a car without being caught—unless of course, they have the support of parents.

Think that over: do you really think a dozen kids would be able to stay up late and exit the house in a car without somebody screwing it up and getting caught by a light-sleeping parent, sibling, or dog? That’s why the Czar is furious about this: there are a few parents apparently okay with this. “Well, I did it when I was a kid,” they say to their conscience, hoping this meaningless sophistry changes the situation from the truth: “I’m okay with my kids being out after curfew, trespassing on private property, and vandalizing totally innocent homeowners without any concern for how this will affect them in the morning.”

The Czar can hear your thoughts, that he’s making a big deal over nothing. It’s not nothing. Ask the single mom who lives next door. It’s a dumb tradition, and like tying firecrackers to dogs’ tails, it’s a relic of a stupid era that needs to disappear.