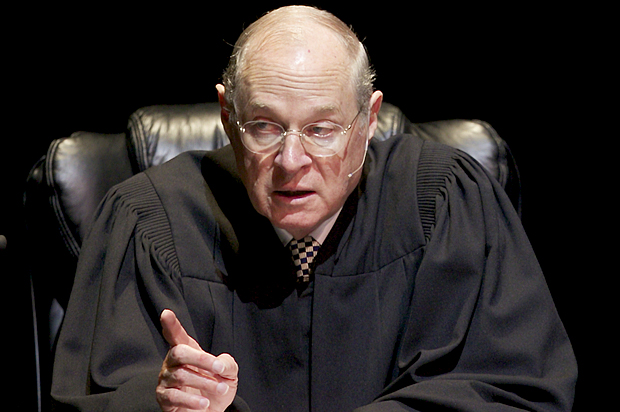 “Now, don’t you listen to ‘Puter, America. He’s going to fill your head with crazy notions like ‘fidelity to the Constitution’ and ‘judicial modesty’ and ‘separation of powers.’ The only thing that matters here is GAY MARRIAGE FTW, AMIRITE??!? W00000t!!1!”

Welcome to the brave new world, boys and girls, where words and law mean whatever a scant majority of nine unelected, robe-clad demigods say they mean, reality be damned.

If you haven’t yet ready the Supreme Court’s opinion in Obergefell v. Hodges, you really ought to do so. Don’t worry, there’s no thorny legal analysis peppered with Latin legal terms and arcane concepts. That’s beneath our unelected overlords.

‘Puter’s read the opinion in its entirety. While sympathetic to the majority’s conclusion, the Justices in the majority have done little more today than elevate their personal self-regard over nearly three centuries of American law, including the governing document of our nation, the Constitution.

‘Puter will likely have more general thoughts on this case later, along with commentary as to the multiple lengthy dissents which he has not yet read. But as an appetizer, ‘Puter figured he’d give you the highlight quotes from the majority opinion, along with a brief, pithy (or pissy) analysis. So here goes nothing.

A first premise of the Court’s relevant precedents is that the right to personal choice regarding marriage is inherent in the concept of individual autonomy.

Good point, Justice Kennedy. Do you know what else is inherent in the concept of individual autonomy? Murder, rape, theft, slavery, and racial discrimination. ‘Puter eagerly awaits the majority’s embrace of these manifestations of ‘Puter’s individual autonomy, because freedom FTW, amirite?

A second principle in this Court’s jurisprudence is that the right to marry is fundamental because it supports a two-person union unlike any other in its importance to the committed individuals.

And this militate for accepting same-sex partners under the definition of marriage how, precisely, Justice Kennedy? Is the same principle applicable to multiple willing partners, or is it limited to a “two-person union?” If so, why? What’s your limiting principle? How about an incestuous heterosexual or homosexual couple? Why isn’t marriage fundamental to them as well? Surely, because marriage “supports a two-person union unlike any other,” marriage must be a fundamental right for incestuous couples as well? And since our only limiting principle seems to be a willing two-person couple, why should there be any age limit on the fundamental due process and equal protection right to marry? *crickets*

A third basis for protecting the right to marry is that it safeguards children and families and thus draws meaning from related rights of childrearing, procreation, and education.

Children, you say, Justice Kennedy. Please explain how a union of two same sex individuals results in a child. ‘Puter’ll wait. Hint: parthenogenesis is not an acceptable answer. Budding would be kind of cool, though. Partial credit for that, if you illustrate it.

Fourth and finally, this Court’s cases and the Nation’s traditions make clear that marriage is a keystone of our social order.

The limitation of marriage to opposite-sex couples may long have seemed natural and just, but its inconsistency with the central meaning of the fundamental right to marry is now manifest.

On what basis, Justice Kennedy? The enlightened wisdom of your colleagues in the majority? The enlightened opinion of the Washington-New York-Boston metroplex chattering classes? Or did you just pull this out of your ass and make no effort to justify it? ‘Puter’s going with the latter.

This is why “fundamental rights may not be submitted to a vote; they depend on the outcome of no elections.”

This is an interesting statement, coming from a group of Justices who fervently believe “elections have consequences” and “I won” are reason enough for government to deprive individuals of their right to select their own health insurance policies.

Finally, it must be emphasized that religions, and those who adhere to religious doctrines, may continue to advocate with utmost, sincere conviction that, by divine precepts, same-sex marriage should not be condoned.

Note carefully the language here. People who disagree with gay marriage “may continue to advocate” against it. There is no language stating that courts may not punish individuals and entities for acting in accordance with those self-same beliefs, as is guaranteed by the First Amendment. The majority is telegraphing that it is just peachy-keen with sticking it to those backwards hicks in the Catholic Church and conservative Judaism who refuse to marry same-sex couples.

Even assuming, arguendo, that gay marriage is a great thing and the highest good ever, the majority’s decision in Obergefell v. Hodges is nothing short of a declaration that the Constitution means exactly nothing when confronted with a liberal policy wish.

You are on notice, America.