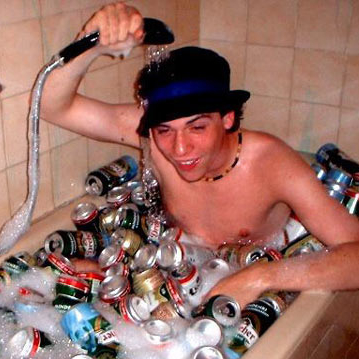 Democrats are the drunks of the debt ceiling debate. Republicans are the friends trying to take away the keys to their car.

Democrats: “C’mon, man!! You used to be so cool, like in college when we’d play beer pong then puke all over the sorority girls!! C’mon!! High five!! Give me another couple trillion dollars so I can go guy some more Jaegermeister and Red Bull shooters!!1! I’m out, and I’m still not wasted enough!”

Republicans: “Dude, you’re trashed. You don’t need any more booze, and there’s no way I’m lending you another couple of trillion. You haven’t paid me back the last trillion you borrowed. And, surprisingly, you don’t have a job because you’re an irresponsible drunk, living on borrowed time and money, so you can’t pay me back anyway.”

D: “Brah! You’re totally harshing my mellow! If you’re not gonna lend me the ducats, China will! China’s totally cool with my little problem! What happened to you, man?”

R: “I grew up. I realized getting drunk every night and borrowing money from China screwed my credit rating and ruined my future. Hey! Where do you think you’re going with those keys?”

D: “If you’re too bogus to lend me a couple trillion, China will. I’m totally driving over there to get my money, so I can get me some more PBR, dude! Anyway, no worries. China will never make me pay that money back.”

R: “Gimme those keys, there’s no way you’re in any condition to borrow more money from that loan shark China, much less drive there.”

And that, my friends, is why friends don’t let Democrats borrow money.