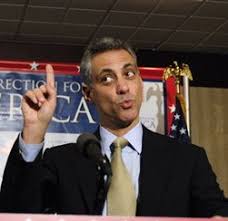 JS wrote the other day with a couple of simple questions regarding Chicago’s upcoming mayoral race. As you know by now, Rahm Emanuel will be leaving his position as White House Chief of Staff to run for mayor.

It was a matter of time before he was asked to leave, as many people seem to view him as a liability to the President’s popularity or whatever. The Czar is very happy to see him run for mayor: because he is certain to lose, and we no longer have to deal with him as Most Pernicious Chief of Staff.

You probably have not heard this, unless you live in the area: in order to run for mayor of Chicago, you need to be a legal resident. And Mr. Emanuel, technically, is not. So he has already lost valuable time making up his mind, because you need to reside within Chicago city limits for at least one year prior to the Chicago election. This hurts him, because he should have been visibly residing in Chicago back in February, 2010.

So he’s disqualified? Not quite. To be considered a resident, you only need to own Chicago property—which Mr. Emanual does. In fact, he still owns his old house in Chicago, which he quickly rented out to someone. But it helps your cause if you actually live in the City itself. Naturally, Mr. Emanuel went to his renter and asked him to vacate.

And the renter told him to screw off. Turns out, the renter read the lease agreement much better than Mr. Emanuel. Basically, as long as he remains a renter in good standing, Rahm cannot evict him. Whoops. As a result, Mr. Emanuel is looking for property to buy in the city. The Czar has some recommendations: there are plenty of boarded up properties all around the area south and west of US Cellular Field. Slight fixer upper. Should be no problem for him.

Okay, so Rahm Emanuel is going to really run for mayor of Chicago. This is where he finds out how distinctly unpopular he is. After all, he barely lived here at all—most people here see him completely as a Washingtonian. Even his brief employment here was viewed by many powerful people as unpleasant at best. Mayor Daley himself, for example, does not speak often of Rahm Emanuel, which is a powerful signal for those in the know.

Richard Roeper of the Sun-Times was refreshingly correct on one point when he mentioned that the good news for Rahm is that the vast majority of people who would vote against Rahm do not live in the city. The bad news, of course, is that the remainder are eligible to vote, and will still be enough to make him 2013’s top-selling Chevy salesperson in Oak Lawn, Illinois.

As you read many stories about Mr. Emanuel in the press in the next couple of weeks, and all his ties and links to Chicago, and what a Big Guy he is here, you should keep in mind that most Chicagoans think he’s a jackass. He is already polling well behind other candidates, and he is viewed very much an outsider with obvious ties to President Obama. And no doubt you remember that President Obama is not nearly as popular in Chicago as the media would have you believe? Thought so.