Wow, big weekend, huh? Putin won by forfeit after Rahm Emanuel died unexpectedly of a hideous, fast-acting cancer from acute α-radiation effects of some 210Po which made its way into his PowerBar. President Obama has submitted the Rahm F.N. Emanuel Memorial Safe Food Act for the nationalization of the entire agricultural sector.

Nosferatu bled Robert Gibbs white, but found him an unsatisfying, nigh bloodless, meal.

Also, something happened in Congress, right? I’m sure we’re all winners. 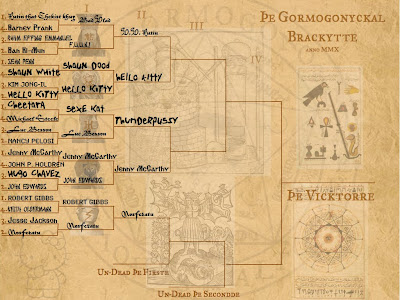 So, for the next round, you get to vote! Whom do we resurrect through the Volgi’s necromantic mojo? Remember—they’re going up against Nosferatu. Vote wisely, young operatives.