Thanks for all the feedback by e-mail. Enjoy.

The first-round results are in. In case you missed it, Vladimir Putin had Barney Frank shot on the front walk outside his house, and Rahm Emanuel pliéd his foot into Ban Ki-Mun’s larynx. Shaun White upset Sean Penn in a shocking first-round upset—apparently his younger constitution metabolizes certain performance-retarting substances better. Hello Kitty annihilated Kim Jong-Il, the entire Democratic People’s Republic of Korea, and devastated a huge adjoining swath of Manchuria. 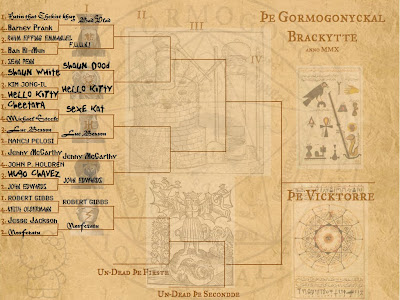