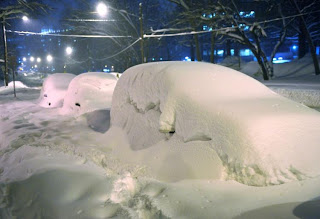 Just when I finish shoveling out the driveway from the latest snow plow pass and power is restored, I get the first shots of the rants from the AGW crowd: record snows are in line with our AGW theories! SnOMG!#@#!#!! – first it was massive hurricane seasons that were going to wipe out the continent which have yet to materialize, then it was the massive flooding from the melting ice caps and glaciers (oops, sorry, maybe these guys should be handing back the Nobel prize), and now it’s death by feet of snow!

Here is the quote that you’ll be hearing in the media spin that’s coming after they get out of their hotel rooms that they’ve shacked up in for the recent Snowmaggedon:

As the climate warms, evaporation of moisture from the oceans increases, resulting in more water vapor in the air.  It’s not hard at all to get temperatures cold enough for snow in a world experiencing global warming. According to the 2007 Intergovernmental Panel on Climate Change (IPCC) report, the globe warmed 0.74°C (1.3°F) over the past 100 years. There will still be colder-than-average winters in a world that is experiencing warming, with plenty of opportunities for snow.

Just remember, this is the same bunch that brought you the “hide the decline”,  that selectively used a not-so-random selection of tree rings to extrapolate historical temperature data, that refuse to release real temperature readings and data, that have predicted the demise of the Himalayan glaciers by 2035.  Wrong, wrong and wrong.  Look, the climate changes, it is what it does.  But models are not fact.  They are flawed and more often than not, recently, the models from the AGW crowd aren’t doing so well.  In fact the prediction for our area was a “normal” winter.  Hmmm, ok, let me go check the 30″ of snow in the front yard and my heating bill and I’ll get back to you.  Maybe when they start considering water vapor, clouds and the Sun into their models, I’ll start paying attention.

Maybe most amusing was the fact that the snow caused the launch of the NOAA Climate Service to be scrapped and simply announced by phone.