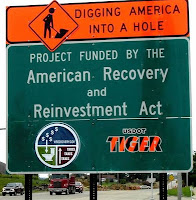 It’s a wonder why people even read the newspapers anymore. You would think that some of the intrepid jornalism majors would have aspired to be investigative reporters. We’ve seen the complete ignorance of hallowed journalism mainstays like the NY Times and Washington Post with regards to the East Anglia emails. But I’m going to focus on another issue that is getting swept under the rug by these reporters and the Obama Administration.
The Administration was forceful in its statements that the money spent on the “stimulus bill” will be fully accounted for and tracked with transparency and reported at this web site (or “web number” for you Biden fans). We’ve reported before that the numbers on the site are flawed and the Obama administration has admitted as such – generally blaming the people reporting the data rather than anything they’ve done. In keeping with that theme, the administration hasn’t done anything to correct the reporting in the month since the data was published. Recovery.gov continues to tout that 640,329 jobs were “created or saved” when the administration and some news agencies have actually cited examples where the “created or saved” number was incorrect. Apparently, the $18 million-plus spent on Recovery.gov doesn’t include corrections.
I took a minute and downloaded the raw data that is made available on the site. I started with the grant data as that is usually a doling out of funds by a more subjective government decision rather than a competitive contract award. The point is clearly made that this money is not “creating or saving” jobs in a meaningful way. For example, 2 jobs were “created or saved” for a summer research program for 2 undergraduate students, 1 graduate student and 2 teachers at the University of California, San Diego. So after the summer ends will Recovery.gov report 2 fewer jobs “created or saved” because the extent of the effort is done then? I doubt it. What about the 5 jobs “created or saved” by the Housing Authority of Windsor Locks, CT, where bathrooms are being renovated in the Federal Family Housing and “Security Camera’s” (possessive pluralization?) were installed. The project is reportedly over 50% complete, so will the Obama adminsitration report 640,324 jobs “created or saved” once done because once those bathrooms are done, aren’t those workers now not in a job that was “created or saved” and therefore “unemployed?” Illinois reports 10.02 jobs “created or saved” doing “VARIOUS” things related to highway construction at various locations Dupage County. Back in Conneticut, 4.24 jobs were “created or saved” on a project whose reported status is “not yet let” – meaning that the contract or award for the highway project hasn’t been made yet. 10.02 jobs “created or saved” doing “VARIOUS”Talk about voodoo economics, the Obama administration are such geniuses that they can predict to the hundredths of a job how many jobs are going to be “created or saved”. In Alabama, 0.99 jobs will be “created or saved” (although it’s counted already) on a project “not yet let” to resurface US-31 from US-84 to the Butler County line. But those are small potatos – what about the Governor’s Office of Planning and Research in California? They were awarded $4,387,948,882 that went into the State Fiscal Stabilization Fund for education (both NY and CA have multiple large awards awarded to “State Fiscal Stabilization Funds” so make no mistake, the rest of the country is helping to bailout California and New York as well as others) and resulted in the “creation or saving” of 53,390.5 jobs—an average of $82,185 per job. Somehow I don’t think the teachers mentioned in the rationale for this award are getting paid $82K a year. In Georgia, the Head Start and Early Head Start program received $1,260,221 in support and reported “There are no jobs created.” but yet the report shows 935 jobs created – maybe they just paid existing employees $1,300 each? The Head Start program in Illinois did a similar move by taking $180,548 and admittedly increasing benefits to their employees. That effort apparently “created or saved” 81.75 jobs.  The abuse and inaccuracy runs rampant through this data.
Having said all that, how many stories of reported fraud or misrepresentation have you heard from the media, Recovery.gov or the Obama administration?  I haven’t heard any.  None.  So we’re to believe that with BILLIONS of dollars doled out to states, organizations and others that there has been no fraud or misuse of the money?  I generally believe in the good in people, but I find this fact statistically hard to believe.  Close to home we have the Democrat mayor of Baltimore, Shelia Dixon, convicted of embezzling $500 in gift cards.  $500!  That’s pocket lint compared to the stimulus bill.
The bottom line is this: it is a complete farce to try to justify jobs “created or saved” by any definition by way of the funds spent as described in the above examples. Many of these projects are either temporary pipe-dream projects to study ecosystems in Costa Rica or projects where federal or state agencies have so mismanaged their budgets and planning that they can’t do all the projects and refuse to tighten their belts like the rest of us during these tough times.