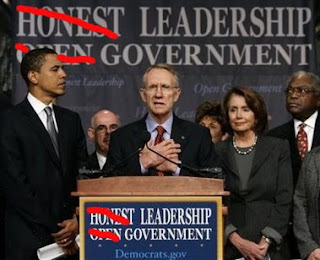 Remember the quote that Rep. Pelosi claimed would be the modus operandi of the democrat-led Congress?  No?  Let me remind you:

Democrats pledge to make this the most honest, ethical, and open Congress in history. – Rep. Pelosi

So fast forward to today and you have Sen. Reid who strong armed the Senate parliamentarian into bypassing Riddick’s Rules which governs the processes that the Senate obeys (or used to) and stopped the reading of an amendment by Sen. Sanders (D-VT) which had to do with a single-payer option.  Sen. Coburn (R-OK) called for the reading of the bill to more fully understand the details.  The call for reading is completely within the rules of the Senate and appropriate at this juncture given to scope, importance and size of the amendment proposed.

Reading: Under Rule XV, paragraph 1, and Senate precedents, an amendment shall be read by the Clerk before it is up for consideration or before the same shall be debated unless a request to waive the reading is granted; in practice that includes an ordinary amendment or an amendment in the nature of a substitute, the reading of which may not be dispensed with except by unanimous consent, and if the request is denied the amendment must be read and further interruptions are not in order; interruptions of the reading of an amendment that has been proposed are not in order, even for the purpose of proposing a substitute amendment to a committee amendment which is being read. When an amendment is offered the regular order is its reading, and unanimous consent is required to call off the reading. (Riddick’s Senate Procedure, P.43-44)

Now the democrats are going to try to hide behind a 1992 precedent where a similar event took place, but the difference was that all parties agreed on the withdrawal of the motion to read.  In this case, Sen. Coburn objected to the withdrawal and wanted the full reading.

So much for “honest and ethical”.  It;s probably why the democrats and President Obama are enjoying one of the fastest declines in public opinion in political history here in the United States.