The second LEGORMOGON set is out in our gift shop. Beware! It’s the Mandarin’s Laboratory! Click to enlarge it. 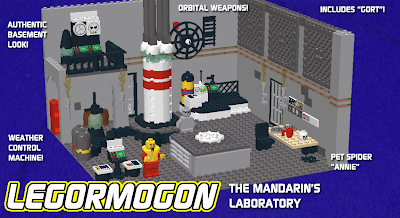 Well, what about it? What do you think the Mandarin and GorT are working on? A time displacement nullifier? A trans-polarity interface? Dimensional dampener? It’s all up to you!

Click here to see The Czar’s Dining Hall Mayhem, which is also a perfect gift for all ages…assuming your kid knows enough not to choke on really tiny pieces of sharp plastic.

See all the rest of the sets!