The latest from the weird folks at LEGORMOGON has arrived!

It’s ‘Puter’s Playroom! Now your kids can access a blog from the toilet, and write just like Ghettoputer does! 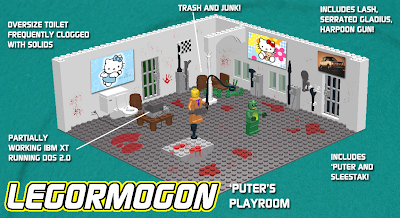 Note: vial of red liquid used to make blood stains on the set may actually be real blood. Because we don’t know if it’s animal or human blood, consider wearing gloves until it dries.

See all the rest of the sets!