Yep, the latest one just arrived this morning. LEGORMOGON is pleased to present The Volgi’s Inner Sanctum. 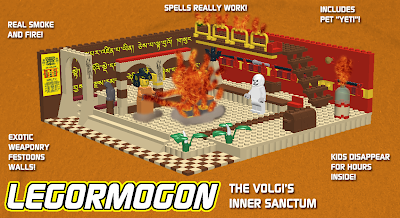 Slight bit of continuity correction, here: at the actual Castle, the Volgi’s sanctum occupies all of floors 4, 5, and 6, and none of us have access. So nobody besides the Volgi and his Yeti, Dga’po, even know what it looks like. So no doubt the Volgi will correct this, but hey, it’s the kids in the marketing department.

And yes, the fire burns pretty bad, so careful with the little ones.

See the rest of the sets!