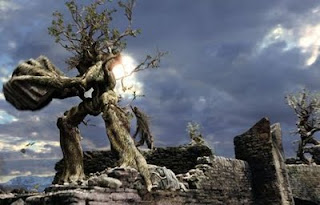 President Obama’s administration has declared war and we should fear the enemy.  This country has just declared a critical component to the life of vegetation on Earth as a pollutant.  They have done this through the corruption of science, misleading of the public and ignoring common sense.  Vegetation has enjoyed an increase in growth as a result of increased CO2 in the atmosphere.  Forests in the U.S. have increased 40% in the past 50 years.  This isn’t all due to the increase in CO2, but it does play a contributing factor.  Plant life on Earth uses the carbon dioxide and converts it, as a b product of photosynthesis into oxygen for the animal life, including humans, on Earth.

Furthermore, all of us are contributing to the pollution by just being alive and exhaling.  So we’ll all walking around polluting up the air – and don’t try that bike to work to try to help things since that will just cause elevated breathing levels and an increase in CO2 production.

On a side note, you might hear in the next few weeks about shrinking glaciers and melting ice sheets while the Copenhagen conference is ongoing.  Take a gander at the following chart.  Note that glaciers began melting before the human contribution to the CO2 in the atmosphere. 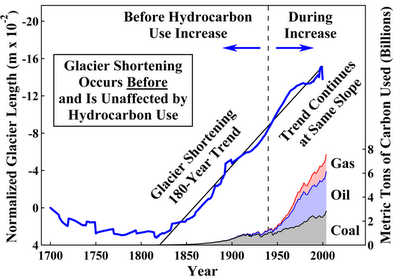 What is generally overlooked is the solar contribution to the environment.  Maybe it’s because that this is very difficult to predict or model and those in favor of the human-caused global warming theory (and it remains just that) threw their hands up in the air (holding their breath as to not cause more warming and get into trouble with the EPA) and went with what they had.  The problem comes in, though, when someone actually looks at past data and sees how well it correlates with solar activity.  For that, I’ll point you at the next chart below. 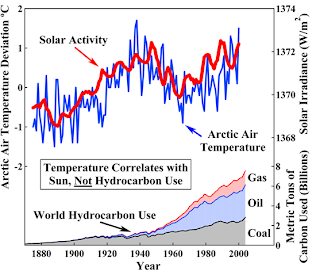 Hmmm.  Not to hard to think that maybe the Sun has some sort of affect on our environment.  The odd thing is that other planets in our solar system exhibit similar temperature trends.  But, of course, it must be sympathy global warming as the other planets feel Earth’s pain dealing with us humans.

Maybe the nitrogen cycle is the administration’s next target.  Soon we’ll be a barren wasteland and we won’t have to worry about these things. And int he meantime, if you see a really pissed off tree because they are suffocating with the EPA’s restriction on their “breathable” gas, then duck – because the rocks they throw can do some serious damage…

“There is no curse in Elvish, Entish, or the tongues of men for this treachery.” – Treebeard, Lord of the Rings

Contact me if you want references on the assertions made above.