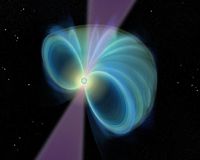 A high-school sophomore from West Virginia has discovered a new astronomical object—a rotating radio transient. Predicted theoretically, this is indeed the first ever confirmed hit, although some candidates had been identified. A rotating radio transient is like stuttering, slow pulsar: instead of a steady whoosh-whoosh-whoosh of radio waves spinning off a collapsed, dead star, the RRAT gives off a whoosh…and then takes time to build up again, like a geyser but less predictably. Catching one in mid-whoosh is virtually impossible, but that indeed is what Lucas Bolyard of South Harrison High School (home of the Hawks!) near Lost Creek, WV, found and correctly identified.

This is like hoping to see an interesting astronomical sight one evening, and having a meteorite drop right into your shirt pocket.

When the Czar was 15, he discovered that if he drank 14 pony beers in 2 hours, all he wanted to do was sleep the afternoon away.