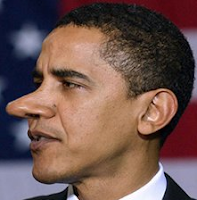 I’d like to tie together two possibly distinct stories from the past few days. The first from President Obama’s appearance on This Week with George Stephanopoulos (transcript of the pertinent section here) in which the President denied that the health care reform plans would impose a new tax, one that the president said he wouldn’t apply to 95% of Americans (or American families, depending on the clip you find). As I was thinking about this post, I read one of my favorites over at Commentary Magazine, Jennifer Rubin. Ms. Rubin dissects this much better than I could but let me pull some pieces from her excellent piece forward:

Kudos to George Stephanopoulos for not letting the President off the hook either. He even referred to the dictionary to try to pin him down. Clearly, like other democrats before him, the President is resorting to parsing words in order to try to be somewhat believable. But let’s put that all aside because the real telling line of the whole interview for me was this one from our President: “…for us to say that you’ve got to take a responsibility to get health insurance is absolutely not a tax increase.” Let’s take apart that sentence. “For us to say that you’ve got to…” really sounds like the government is telling us that we have to do something. And it’s well beyond many of the comparisons that liberals are trying to use (for example, requiring health insurance is like requiring auto insurance which is an apples and oranges comparison). “[T]ake a responsibility to get health insurance” – has anyone read my recent posts about Libertarian Paternalism. This screams of it. Because the government knows that you should have health insurance, it’s going to fine you until you do to nudge you into getting it. Ridiculous. And the President closes with “absolutely not a tax increase”. Watch this one closely. If this story gets rolling (see my next point), watch and see how this line gets spun by the White House. Remember, this is the Administration of “what they meant to say was…” Speaking of, has anyone heard from Say-it-ain’t-so Joe Biden recently?

The second thread that I’d like to tie in is the recent rumorings that the President would be open to assisting the newspaper industry. Sen. Ben Cardin (D-MD) has introduced S. 673, the so-called “Newspaper Revitalization Act,” that would give newspapers tax deals if they were to restructure as 501(c)(3) corporations…Sen. Mikulski (D-MD) signed on as well.

“I am concerned that if the direction of the news is all blogosphere, all opinions, with no serious fact-checking, no serious attempts to put stories in context, that what you will end up getting is people shouting at each other across the void but not a lot of mutual understanding,” said Obama.

Really? No serious fact checking like the news has had over the last decade? Right. So go pick up one of these fact checking papers that puts forward serious attempts to put stories in context and see if and how they are reporting on the “no taxes for 95%” pitch by Obama and the current healthcare plans “tax.” It’s barely covered. This should be front and center. Here was a major component of President Obama’s campaign that now he’s parsing words around to try to save his push for nationalized healthcare. And I haven’t even mentioned the fact of how would a newspaper be able to claim to be objective about our government while having their hands out receiving government (taxpayer) money. There’s a reason I don’t read the Washington Post – the journalism, largely, stunk and was biased. It’s a known fact when you look at the coverage Obama received from the newspapers during the campaign. So one should wonder why government money funded by our tax dollars (or maybe we should rename this to “responsibility for government initiatives payments”) should go to the newspapers. Times change, media changes, maybe it was just inevitable.