↓
Home→Apple→Apple, Google and the future of data services 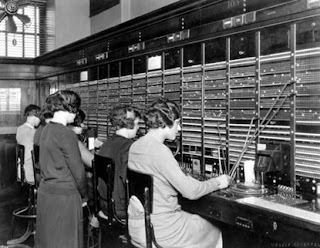 I enjoyed reading a decent opinion piece in the WSJ today at the beach. I don’t quite agree with all of the recommendations of the author, but would wholly embrace the statement:

“Technology doesn’t wait around, so it’s all going to happen anyway, but it will take longer under today’s rules. A weak economy is not the time to stifle change.”

This is the time to encourage innovation – it behooves the economy in a number of ways. First, it creates jobs. Jobs for the big picture people who dream the big dreams, jobs for the engineers, scientists, and manufacturers who take pipe dreams and solidify them into reality, jobs for the entrepreneurs and salespeople eager to find that next opportunity to grow some business, and so on. Second, innovation begets innovation. There is always someone out there with a new use or unique twist on a novel idea. Last, and most importantly, we tend to crave the new and exciting. We’re like birds in that we get attracted to those bright, shiny objects out of the corners of our eyes. No, not the GorT action figure.

So when innovation gets crushed by potentially monopolistic powers like Apple and AT&T, it’s a sad day. However, it’s completely legal – what should be (and I hope is) happening out there in the marketplace is the collaborators should be scheming to get around these hurdles. Follow the math that Mr. Kessler outlines and you’ll see that there really is no good reason why we’re paying 20 cents per text message, or $50 for a landline, or whatever ridiculous amount I’m paying for my cellphones with data access. It is what the market will bear – which is great in our free market economy and I’m all for that. However, we need to temper that with innovation and make sure that exclusive municipality deals or EM spectra restrictions don’t hamper it. Text messaging is a joke to these carriers – they send them along in the under utiltized control channels. Think of what happens when Skype or an idea like it (although rumors are that they might be bought out and shut down) explodes. Free calls. Anywhere. Anytime. Phone companies? Pfft. Maybe to sell hardware.

Stifling innovation is, as noted in the above quote, futile and does not do us as a whole any good. It might prolong the profits and sustaining of a market segment but take a page from Netflix CEO Reed Hastings who believes that the DVD rental business is a dying (or dead) business and therefore is pushing his company to innovate to stay alive. That’s what this country needs more of these days.

And trust me, GorT has much more bandwidth to the Gormogon Castle than what Mr. Kessler hints at for 2017.