↓
Home→Music→Back In the “Olden Days” 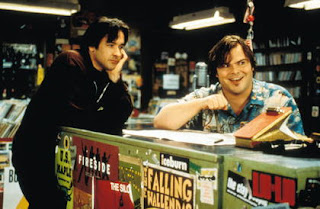 We were doing some cleaning and organizing around the house this past weekend and one of my kids helped me move a stack of record albums off a shelf. We got into a discussion about vinyl records and how, in her terms, I “used to listen to these in the olden days”. I appreciate technological advances like the CD and DAT (Digital Audio Tape) and the likely future of portable electronic-stored format music (by which I mean that CDs will begin to fade in popularity as people will use electronic media for music).

I was reminded of this as I came across this article today. After reading it, I was tempted to go back in time (rather than forward) and revisit some of my favorite record stores of the past. Sure, there was Tower Records and the other chains in the malls but the real stores were the ones that had a certain character. I close my eyes and see the narrow aisles lined with milk crates, wood bins and other makeshift storage racks tattooed with bumper stickers, posters and other graffiti advertising a variety of artists. Places like Criminal Records in Little Five Points (in Atlanta) and a number around the D.C. area existed as well. A trip to such a store was an experience. Maybe you had an artist in mind, but more than likely, you ended up leafing through the stacks of albums picking up the plastic covered albums to examine the track listing on the back. This is likely a niche market these days with the advent of the iTunes Music Store, Rhapsody and the like. There are alternatives that are struggling along in these modern days.

So if you love music or are feeling nostalgic, take a minute and see if you can find a local store before technology advances and ObamaCare runs them out of business.