To wrap up this series, let’s look at what’s really happening out there in the world. To echo one of ‘Puter’s points, I’m not arguing to do nothing – yes, we should be good stewards of the environment, but with a reasonable and reasoned approach.

Remember those science experiments that the Czar and I referenced – you know, the ones about all the ice melting and the polar bears having no space to live? Nature is bigger and more complex than we know. It should be readily apparent from the next two charts that there is a cyclical nature to the environment. The first chart shows the area of the Arctic sea ice. Sea ice covered about the same area in April of 2009 as it did 29 years ago. 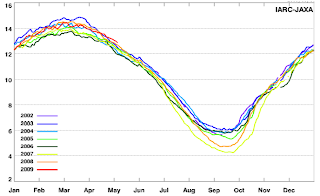 And then there is the Antarctic ice – it’s currently at the third greatest extent in 30 years (since satellite data began). If we look at the global picture, we can see the rhythmic nature.

This is factual data so there is no disputing it. It’s just not sensational, so we won’t be hearing about this in the news anytime soon. Executing policy against models or “beliefs” is not sound. We should all work to end this behavior now.

I used a number of sources for this data but would like to note the excellent work by the Science and Public Policy Institute.