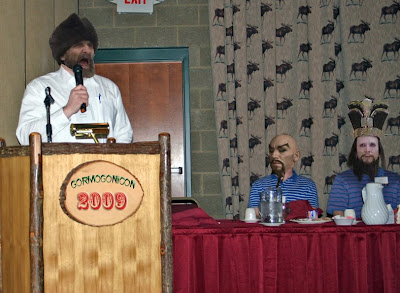 A synopsis of the Fifth and Final Day of GormogoniCon 2009

Flaunting our utter lack of need to tie together the various open-ended, cryptic, and superficially nonsensical remarks delivered over the previous four days, the Gormogons’ final day of speeches was a speakers’ choice, based loosely around the topic of world domination. Excerpts follow.

8:30—You Must All Make Me Your Occasionally Benevolent Despot—Ghettoputer

“‘Puter is always right. Ergo, ‘Puter deserves universal dominion over all life. About this, there can be no discussion. Consequently, I depart this topic for something near and dear to my heart. Scatology.”

[There follow forty-five minutes of remarks, jokes (?), and analyses, in the words of a UFO-traumatized Eric Cartman, “about things going into or coming out of my butt.”]

[Turns to waiter refilling his water pitcher, slaps him across the face, spilling water everywhere.]
“OBEY THE ‘PUTER!

“Thanks, you’ve been a great audience. I’ll be signing autographs by the pool this afternoon. Try the mojitos. Esteban is a master!”

[The complete transcript of GorT’s remarks takes up 3.2 MB of binary code. However, it concludes:]

“My esteemed colleaguesss’ points are well taken, yessssss. What? Yessss, the Mandarin speaks binary. He speaks all tongues of sssecret élitesss. But they have neglected study of the Main Enemy, the great impediment to our meeting our goals: the so-called ‘Freemasons’ with their doctrines of political correctness, racial classifications and privileges, disarmament of the populace, corporatism, and—Goddamnit, isn’t anyone else getting pissed off here?! I mean, Jesus, it’s so—hard to be—inscrutable when these jackasses are out there screwing up the…”

[Here the Mandarin breaks off for thirty-two minutes of muttering to himself. The transcriptionist merely notes “speaking foreign language.” Careful analysis of the tape leads our experts to surmise it was the long-extinct non-Sinic Chu (楚) language which flourished in the Warring States era (c. 430–221 B.C.), due to what seem to be the phonemes tau-wu (=monster), glap (=sword) and guk (=suckle) but it was in any case mumbled rapidly to near-unintelligibility.]

“So, right, the Freemasonssss. Long have I studied in the occult and unsettling lore in the library I have painstakingly assembled from around the globe in my secret castle fastness. I have plans. Fiendish plans. Involving dungeons, acids, poisons, radiation, fishhooks, venomous spiders, and sarcasm. Looks like I’m out of time, jackass schedule, but I’ll have my Nineteen Tomes of Hell, painstakingly inked in the blood of hippies, on display in the bar in case anyone is interested in the details. 乾杯! And remember the most important thing is the w—[unintelligible: several sentences]—goblin smack [?—Ed.].”

1:30—I Am the One True Czar—The Czar of Muscovy

“Long have we labored, the burden of tsarstvo heavy upon our admittedly broad shoulders, weighing alternatives, evalutating data, and finally, issuing the ukazes which command our subjects to right and obedient action in the service of their Czar and the God by whose Grace he holds them in his iron fist.

“So it was a draught of bitterest gall when we saw that Obama, that Mason-marinated impostor, student of Davis, Ayers, and Wright, that post-partisan fraud, that profaner of the Fulvous Madonna of Chelyabinsk, had dubbed various of his apparatchiki ‘czars,’ in order to meretriciously lend them some of the Glamour and Legitimacy with which we have been endowed by Providence and have earned during our lengthy years of toil in the rule of Muscovy.

“So unto you, O Obama, we say, scorn! Defiance! Slight regard! And anything that may not misbecome us do we prize you at!”

[The Czar then rants for three hours and twenty minutes, hurling imprecation and periodically calling for the execution of various hotel staff members whose customer service he found unsatisfactory.]

“And in conclusion, as it is with you, Obama So-Called, so shall it be with all your henchmen, cronies, goons, minions, flunkies, and stooges! We shall fight you to our last breath! And victorious we shall emerge! Utterly victorious! Crushing you beneath our bejeweled slipper! Fie! Fie! Fie!”

5:00—The Foreign-Political Implications of the Appearance of the Yellow Sign and the Late Theft of the Pnakotic Manuscripts—Confucius (Œc. Vol.)

“The Czar, peace be unto his mailed fist, seems to have taken us past the concluding hour. So your Œcumenical Volgi will be brief. In my Lun Yü, or Analects, you shall find abiding principles to govern your actions, albeit addressing the exigencies of different era, but handily analogical to the present day. I leave you with these first principles:

“Go forth and do the Gormogons’ work. But please vacate this chamber expeditiously for we are informed that the hostelry must repurpose it by seven of the clock for the nuptial reception of Epstein and Rabinowitz. Godspeed! And mazel tov to the newlyweds!”

And thus endeth the final day. We hope to see at least sixty times the number of attendees next year, so please buy your tickets early.