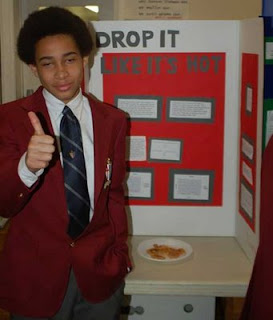 Last night was the “science fair” at my kids’ school. It was revived by the middle school (6-8th grade) science teacher after years of no major projects being done. I have two main points to write about here – first, a general societal observation that is unsettling and second, a summary and set of comments about the projects I saw last night.

To level set people, GorT has been through a number of science fairs starting in 7th grade and continuing annually to my junior year in high school*. My projects included everything from Acid Rain on bean plants, measuring intra-brain communication times to a “robot” (in more modern terms, it was an automated crane system with 3 degrees of motion and a gripper and black-and-white computer vision). I won a number of awards throughout this culminating in a finalist in an Air Force science exposium and being named a runner up in the national Westinghouse Science Fair. By no means could I have done this without my parents’ help, but I would classify their help in two categories: (1) motivation, encouragement and holding me to doing good work in a timely fashion (all of which have served me well in my adult life and all of which I think fall into the “job description” for parents and (2) help in guidance and efforts that were either too dangerous (handling acids in 7th grade) and some power tools and engineering with the robot in high school. Largely, I felt that projects I did, and those of most of my peers were done by the students.

To my first point, let me say that I am starting with a bias. It is clear to me that, at least within my community and within the general elementary to high school level, it has become ultra-competitive mostly on the parts of the parents. This is largely in sports, but it trickles over into academics as well. While, not a bad thing on the outside, the resulting behaviors are what is disturbing. I can easily point to several families of middle schoolers where parents are DOING their kids’ homework and have admitted it to both other parents and school administrators. They complain that there is too much work (true, if your priorities have your kid goofing off from 3pm until 5pm, attending sports practices or games from 5-7:30pm with some sort of dinner crammed in there and then letting them watch American Idol or worse until 9:30 or 10pm). You should have heard the outrage by some parents when the school brought back (finally getting a backbone) the concept of summer reading lists with a report. So specifically with the science fair last night, I was pleasantly surprised to see a large number of projects that were clearly done by the students (some maybe within the last 24 hours). Sure, there were a few that went over the top and it was clear that a great deal of parental help was involved, but largely it was students at the helm.

To my second point concerning the projects that I saw, I worry to a degree that while it’s being taught, the strict scientific method isn’t being applied in some cases. It was clear that some projects were largely a research project where conclusions were drawn from easily researched media outlets. There were a number of “global warming” doom and gloom ones – polar bears on the brink of extinction (false), harp seals, etc. However, I tried to hunt down the boy who had the project titled, “Global Warming, Global Cooling, ummm, Climate Change”. His conclusion while not explicitly stated (the weakest point in my evaluation of his presentation board) was that we just don’t have enough conclusive evidence to support one or the other. Maybe he came across the recent Czar and GorT postings about Archimedes as he even included an experiment with melting ice and measuring simulated sea levels. I fear that our school science classes are being influenced by popular beliefs and not exposing the kids to factual science. Maybe there’s hope yet – as I walked out of the auditorium, I passed an experiment by a 7th grader titled, “Acid Rain and Its Affects on Plants”. It was well done, methodical, simple but rational in its approach and conclusions.

* As a side note on my junior year, a number of my classmates(including ‘Puter and the Volgi) created a faux science fair project titled, “Spontaneous Human Combustion” affectionately abbreviated “SHuCo”. We created a presentation tri-fold complete with pictures (one of the 1980 U.S. hockey team piling on goalie Jim Craig when they won with the fake caption that they were smothering him in an attempt to save him. We got it added to the printed list of projects and several judges actually reviewed the project. We ended with an Honorable Mention for creativity as word leaked out about the authenticity of the project.