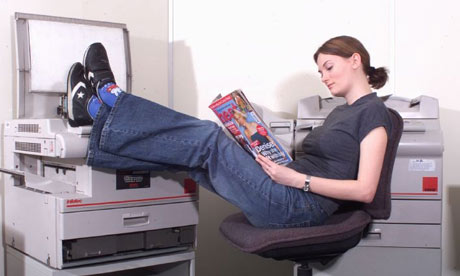 Why, you ask? Because a federal bankruptcy court has held that Vallejo, California, in the context of a Chapter 9 filing (municipal bankruptcy), can void union contracts. Not renegotiate. Void.

The Court’s reasoning is a matter of statuory construction. That is, Congress chose not to offer municipal unions in Chapter 9 proceedings the same protections that private unions are afforded under Chapter 11 reorganizations. Congress inserted a provision protecting union workers into Chapter 11 of the bankruptcy code (11 U.S.C § 1331), but did not insert an analog into Chapter 9. As such, the Court reasoned, he could not make such a requirement up out of whole cloth. Or thin air, if you prefer. Therefore, Vallejo was free to reject the union contracts in their entirety, including contractual pension benefits. ‘Puter’s betting the judge is a Republican appointee.

This is fantastic news for taxpayers everywhere. It now gives taxpayers leverage over public unions hostile to any sort of reality-based compensation structure. Now public unions must weigh the consequences of their spiraling wage and benefit demands against inciting taxpayer anger. If unions overreach and endanger the municipality, they can lose their jobs and their pensions.

Admittedly, as the linked article notes, when a municipality files bankruptcy, the filing will negatively impact its bond rating. However, when balanced against the union cancer slowly eating away at the municipality’s future prospects, a junk grade bond rating may be a small price to pay for freedom.

Going forward, ‘Puter expects that the bankruptcy court’s holding will be affirmed on appeal, but that the Democrat controlled Congress will quickly amend Chapter 9 to include language similar to 11 U.S.C. § 1331 in order to appease its union masters.