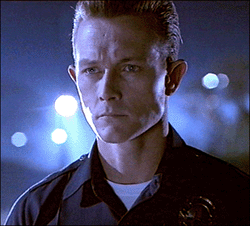 No, not the T-1000 (pictured).  This post marks the Gormogons’ 1000th post.  I’m a big math guy and numbers can mean (or used to mean) so many different things.  We’re averaging 4.44 posts per day (all quality, no fluff).  I’ll leave the visitor statistics to the Volgi even with his bent towards baseball where one uses numbers to record a play because the action is so……darn……fast….its….hard….to….keep…..up.

So here’s to another 1000 quality posts coming your way with all the usual humor and mocking you’ve grown to love.