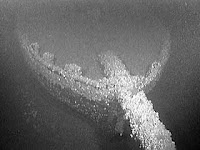 Two explorers have found a dagger-board schooner in Lake Ontario just west of Rochester, NY. It is apparently fairly well intact and sitting upright on the lake floor about 500 feet underwater. The mystery is that there have been no reports found of a dagger-board type schooner sinking in the lake. These ships were in use in the early 1800s. Oddly, the video surveillance of the ship from the exploration team shows that it appears that the ship has been stripped of all useable items. Aside from the case of beer that Puter left behind as the ship went down.