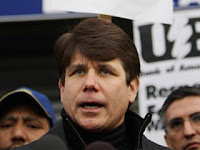 As mentioned below by the ‘Puter, all the Chicago / Illinois politicians are making visits on the Republic Doors & Windows sit-in. That is, all but Gov. Blagojevich (D). He’s enjoying a little stay behind bars for trying to sell the about-to-be-vacant Senate seat previous held by P.E. Obama. read more here. Is this the kind of “open, honest and ethical” government that Pelosi and company touted would be coming with the rise of the democrats to power in Congress? (at least Rep. Jefferson (cold, hard, cash Jefferson) is facing justice of sorts as Anh “Joseph” Cao (R) beat him in his failed re-election attempt). Maybe as the honeymoon wears thin, the hoopla over the P.E. “who is he really” Obama will open other people’s eyes as well and maybe some of his connections back to Chicago politics will come back to haunt him.