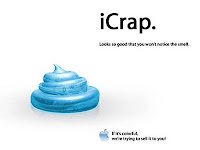 A long time poking between the Gormogons is over computer equipment. Back in the day, GorT was sporting a Atari 800 with 64K RAM (non-standard memory cards used) and the Volgi was styling with an Apple ][e. Today I run a variety of machines in the house (including a PowerMac G5) but I find both Apple’s mocking ads of Vista and anything mocking Apple pretty funny. Well, one of the kings of mocking is in on the action. For your viewing pleasure:

So good on so many levels. iLaugh.