↓
Home→Americans→We’re A Bunch of Selfish Babies 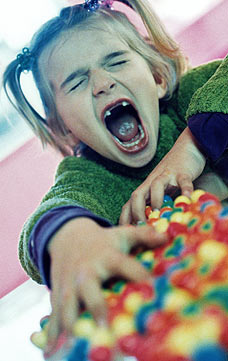 You want to know who’s really responsible for this economic crisis?  Look in the mirror.  See that handsome chap/fetching lass staring back at you?  It’s all his/her fault.  I want more, I want it now and I don’t care what it’s going to ultimately cost.  Screw paying cash, or saving up, or foregoing the purchase altogether.  I want it now, and consarnit, I’ll put myself in hock to get it!

George Will speaking this morning on This Week with George Stephanopolous commented on exactly this topic.  Briefly, Mr. Will stated that the inability to delay gratification is a sign of childishness.  Mr. Will implied that the current state of America in all sectors is a direct result of the infanitilization (whether government or self inflicted) of the American public.
The average American savings rate?  For the last four quarters, it averages about 1% of disposable income.  And check out this terrifying series of charts.   Americans now carry nearly as much debt as the entire GDP of the United States in the most current year.  For all households, just under 20% of income goes to pay debt.  The ratio of household debt to income?  About 1.3.  How much revolving consumer credit is outstanding?  At the end of July 2008, about $963 billion.  How much is that?  Assuming 350 million Americans, it’s about $2,750 for each man, woman and child in our country.  Family of four?  You owe about $11,000.  Non revolving consumer debt is $1.609 trillion.  Running the same math, that’s about $4,600 per capita, or $18,400 for a family of four.  How about the national debt?  That’s about $9.85 trillion, or $28,140 per capita or $112,500 for a family of four.
So, America’s inability to be fiscally prudent has the average American in debt for a total of $35,940 of self and government inflicted debt.  And this only accounts for the principal of the debt, not the rapidly accruing interest.  Assuming an all-in debt of the types discussed herein of $12.4 trillion and an annual rate of interest of 6%, debt service is $745.3 billion, or $2,130 per capita.  And this assumes no further borrowing.  So, just to tread water, we have to each pay $2,130 annually.
Living beyond our means has finally caught up with us, and it’s no one’s fault but our own.  Sleep well, and remember when you’re complaining about the economy, it’s not just Wall Street that caused this mess, it’s that face staring back at you in the mirror as well.